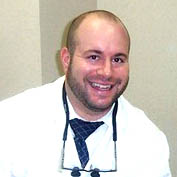 Dr. Richard A. Rosen received his undergraduate degree from Tulane University in New Orleans, Louisiana. He graduated with Honors in Psychology. He continued his education at New York University's College of Dentistry graduating at the top of his class, and being inducted into the prestigious Omicron Kappa Upsilon dental honor society. At NYUCD, Dr. Rosen also received an award for Excellence in Restorative Dentistry.

Since graduating, Dr. Rosen has completed a residency in general dentistry at New York Methodist Hospital in Park Slope, Brooklyn. There he received training in all facets of dentistry including implants. Upon completion of his residency program, Dr. Rosen was presented with an award for Excellence in Prosthetic Care from a top New York prosthodontist.

Dr. Rosen has recently added a Brooklyn office, Carroll Gardens Dental Associates, where he brings the same expertise and skill to the residents of Carroll Gardens and Cobble Hill. Dr. Rosen has been featured nationally on ABC, CBS, and NBC news discussing new technology used in his office. Dr. Rosen can also be found in both SHAPE and FITNESS magazines, where he is interviewed as an expert on the different bleaching techniques used in dentistry.